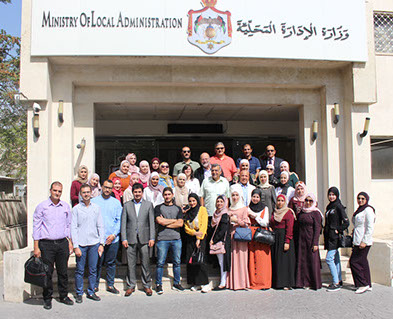 The group engineers-trainees who prepare the street naming maps in all 92 municipalities in Jordan.

‘Interesting to observe that giving names to streets is an all-encompassing participatory process: from the technical GIS mapping, to doing the foot work of going door-to-door, and the political decision-making on the choice of names and of the correct mapping of the streets. A lengthy, participatory process but very rewarding for the municipalities and the project team, and an important step in developing the quality of municipal service delivery.’

‘If you are looking at public security, the first actors that can help with that are the citizens themselves.’

‘…the national project we were involved in, ended with just the theory of things. We are actually now putting into practice. We are really working together and not just meeting.’

‘…the value of this project is raising the awareness on importance of  cooperation with the Local Government. Meetings have become more frequent since this project.’

In 2011, the Jordanian government passed the Decentralisation Law and the Municipalities Law. These laws provided the Jordanian government with the opportunity to clearly define the role of municipalities in the country’s governance framework, helping to improve conditions for Jordanian livelihoods and increase municipal accountability. The USAID Jordan Cities Implementing Transparent, Innovative and Effective Solutions (CITIES) project, which started in 2016, aims to support these reforms by improving government service delivery, focusing in particular on municipalities. The project seeks to transfer functions and responsibilities to municipalities, and helps key governorates and municipal stakeholders to translate administrative reforms into community cohesion and stability, thereby increasing citizen responsiveness and resilience.

After decentralisation reforms took effect, municipalities were confronted with a wide range of challenges and faced difficulties delivering basic services to their citizens. Services such as budgeting and running cost-effective solid waste management processes were under pressure. VNG International’s contribution to the project focuses specifically on these aspects. We work on this with a third of the total number of 92 municipalities and with the Ministry of Local Administration.

Another primary focus of VNG International’s contribution to this project is on street naming and building numbering. In many municipalities in Jordan the streets lack names and the houses are not numbered, making it more challenging for municipalities to deliver services to their citizens. With GIS-mapping and as a result of intensive work with the municipalities, their councils and various participating ministries are now getting their streets named, and have more grip on their area of operation.

Results achieved in 2019 include:

CITIES is funded by USAID and implemented by Chemonics in partnership with VNG International.