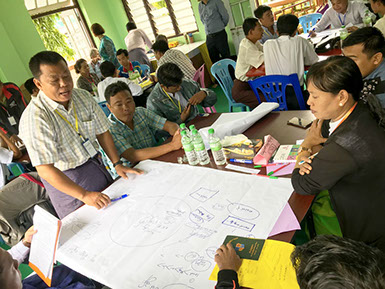 Participants of the Myeik public hearing discuss the prioritisation of infrastructure projects. 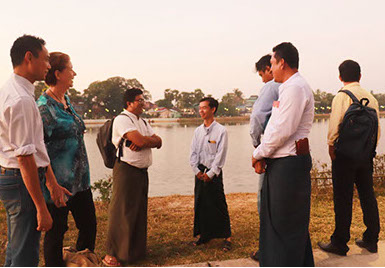 ‘People ask us why we work on waste to improve governance? It is because waste is not just a problem of households, or of CSOs, or of businesses, or of the community.

‘There are enough steps to take towards full participatory, inclusive and meaningful citizen consultation, but the Myeik example is nonetheless an important step away from the previously self-fenced Sipins in Tanintharyi Region.’

The MAGIC project works on two interrelated areas: strengthening the technical capacity of the municipality – the Township Development Affairs Organisation and Committee (TDOA and TDAC – together called Sipin) – and the involvement of citizens in decision making. These two ‘legs’ are closely interrelated and aligned. This approach of working both on the technical side and on citizen participation, which has been elaborated in the so-called MAGIC roadmap, is exceptional in Myanmar.

Some of the results achieved so far:

It is interesting to have a closer look at the Sipin in Myeik. In the past, the Sipin only showed the budget to ward administrators. During the first public hearing workshop the Sipin explained what they were planning to do. The participants asked for the rationale behind some infrastructure projects, raised issues and difficulties. Hereafter, the participants were divided into smaller groups for a prioritisation. Their main priorities were road construction, drainages and encroachment of public areas.

A great result was that the participants also pointed out that besides this session, they still felt the process could be enhanced. They requested the Sipin to visit the wards and observe actual needs of citizens.